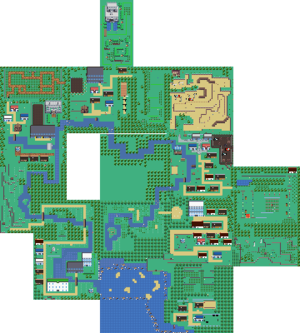 The Fondent region is a small coastal country in the world, dominated by mega-corporations, called Pillars. Of these, the most prominent and powerful is the news and entertainment media monopoly Omnichannel. It is the location of two proposed plots:

The region is named after "fondant", the icing on wedding cake, and the "fundament" (the Heavens, referring to the Cathedral). The towns and cities in the region are named after wedding anniversaries.

Other names proposed by Apollonius: 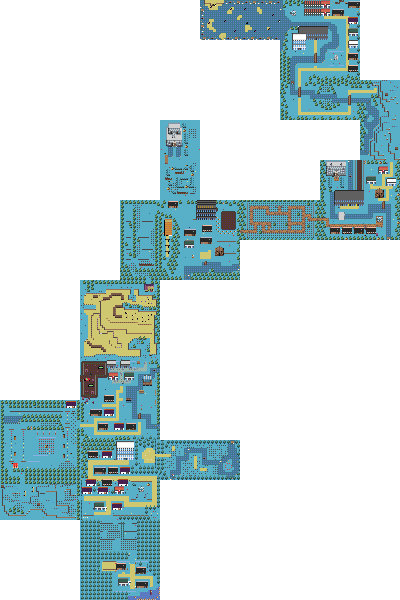 The original map was spread out.

These combination fast food and retail stores sell items, and will also heal your tuxemon - for a fee, or if you sit through an ad from one of their sponsors.

They offer other services that are slowly made redundant by Team Bazaar:

In each city, Team Bazaar, the hackers and free spirits, find hideouts where they can avoid the Pillars' scrutiny. They're a place for battle and healing, as well as scoring new open source apps that Team Bazaar programmers have developed.

Before each city or town's hideout will accept you and give you free healing, you have to defeat a bunch of them in battle.

Once reopened, they allow you to travel immediately and safely to any city or town that you have already been to.

Each Pillar sells a Category:Badge which, when given to a monster, causes it to morph. The effect ends when the monster is treated at a Centre.

Omnichannel HQ is in Cotton Town.

Shaft HQ is in Leather Town, but the main action takes place on Route 3 to the north.

Monsters associated with Shaft include:

Nimrod HQ is in Flower City.

Monsters associated with Nimrod include:

Nimrod also introduces the player to robot Threats: opponents you can battle that are not monsters.

Scoop HQ is in Timber Town.

Scoop Stores are found in most towns and cities.

Greenwash HQ is in Candy Town.

In The Spyder in the Cathedral, Greenwash invented the Fusion Report which allows Fusions.

The Enforcer Boss commands Enforcer Rookies and Enforcer Agents. They are the privatised police force of the Fondent region. They prefer forceful and intimidating monsters:

Organisations at the time of Qiangong2's plot[edit | edit source]

Omnichannel is the ruling power in the region. Local Government has some power, but most everything is controlled by Omnichannel. Structure is set up like North Korea a bit. Kane has absolute power, though there are his "advisors", the "board of directors". Enforcers are the Omnichannel's version of Team Xero grunts. Some Tuxemon research is done at Omnichannel, but most is outsourced.

Martin Xero was purged when it was found out he was saving Tuxemon instead of helping to kill them off. Misa created Team Xero from some of her friends within the Xero Institute right after her Father was purged by Kane. Slowly it grew until Team Xero encompassed all of the Xero Institute. The Xero Institute is the only branch of Omnichannel allowed to breed new Tuxemon without getting approved by the "board of directors" (which never happens).

Healing in the Fondent region comes at a cost - initially we were thinking the player would have to sit through an in-game advertisement (for Greenwash Graze-X or Miaownolith Milk or something, not a real product). But another option would be to actually charge the player each time.

Players could also buy private health insurance which might save them money - but it would come with a hefty cost both in terms of the fee and the excess. It would also have a long list of terms and conditions which the player could read - but which would take a while, and they'd keep getting prompted to quit reading.

All done. That will be $x dollars. [Or: Plus a $x call-out fee since we had to send the ambulance to collect you.]

Oh, you can't afford to pay? No problem. We'll add it to your bill, plus 10% interest. [Interest charged on all money owing not just new debt.]

Private health insurance offering for one (1) person (hereafter, the "licence holder"), applying to up to fifty (50) monsters captured, traded, bought, won or otherwise possessed by the licence holder. This offering is only valid between 1 January and 31 March of this year. Ambearance Cover Ltd can withdraw the offering at any time.

Ambearance Cover is available for all persons between 15 and 65 years of age. It pays medical costs for a licence holder's monsters at all approved hospitals, approved allied health facilities and approved vetinerarians and specialists (whether administered in their office or on-site).

For the avoidance of doubt, Ambearance Cover does not apply to:

Licence holders may not capture, trade, buy, win or otherwise possess other humans for the purpose of them qualifying as "monsters" Humanoid "monsters" are eligible for healing only at Ambearance Cover's discretion.

"Abuse" of the policy includes but is not limited to:

A licence holder that fails to report, fails to accurately report, fails to pay or otherwise withholds any part of Ambearance Cover's licence fee will be liable for three times the amount withheld, plus 10% per month compounding weekly.

Excess is $100 in all cases. The excess can be modified at any time without consultation or the licence holder being informed ante facto or post facto.

BOY. If the player talks to the boy while the player's monsters are all at full health

Wow, your monsters look really healthy! That's so great. You must be rich to be able to look after them so well. Hey -- if I gave you my buddy RUFF, you'd look after her, right? YES

NO Oh. Yeah. Fair enough. It's real expensive, I know.

Hey, your monsters are in rough shape. I understand what you're going through. My WOLFFSKY got herself hurt, but we can't afford the doctor's fees just now to look after her. It's rough.

PARENT. I feel bad. When we got him that WOLFFSKY for his birthday, we never realised how much the vet fees would be. We just can't afford them. And then RUFF got in that fight ...

If you come back to the house later:

If RUFF is in your party and fully healed, dialogue option: