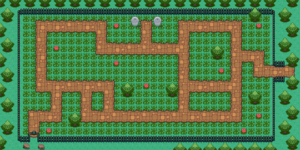 When you first enter Route 5 through the BROKEN-INTO HOUSE, you are intercepted by a Spyder Rookie, who battles you. She lets slip that she has some knowledge of your character that only an ENFORCER would have.

The trainers are arrayed so that people avoiding grass encounters by walking on the path have to provoke the trainers.

(A family of four are together in a clump)