This is a page for ideas for Tuxemon series games, that don't necessarily fit with Episode 1: The Spyder in the Cathedral.

Ideas for The Spyder in the Cathedral Postgame[edit | edit source]

Remember back in TIMBER TOWN? Some bazaar dudes shared contacts in there...
One guy (or a girl?) was especially friendly, the player and him/her had contact over the phone more than with others... because, well, s/he is nice and helps out a few times maybe. also checking if the player does any good and maybe even give a little money over the bank sometimes, for a little "I thought you would need a blabla, so here is a little gift! We are friends at all so I figured you would be happy to have a xyz", sometimes randomly calling with a "how are you doing?" and maybe this guy/girl also helped with the hoverboard upgrade...
Now, when you're in the final area... you are not able to call people. Because of the walls or something else, your NU phone has zero connection.
* Something feels odd, and as you get closer your phone rings. It's him/her. And s/he is ready to take you on.
*when calling anybody (other than him/her) "NU PHONE has no connection" - most player's will give up instantly. But if you try out every number, you eventually get "It rings... It rings.. It rings... s/he didn't accept your call", which already gives a hint that this person is somewhere closeby.

Devamped sprites could be used for an old-school version of Tuxemon.

Play a child sent to a school camp for six weeks. The protagonist can wander the camp grounds during the day, capturing and battling tuxemon and searching for items. Then they return to the campground for the evening, where they battle other campers and are awarded badges for achievements.

Some areas are only available to students with certain badges.

There is a calendar counting the days, so players can measure their progress against an objective measure. Players that are knocked out during the day have to rest through the evening; players knocked out in the evening have to rest through the day - so players must balance exploring a little further or battling another camper against the risk of missing half the day. 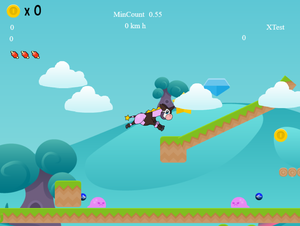 A shell of a game created by Sanglorian in GDevelop. Inspired by Monster Racers.

Each gym wants to defend its own Badges and claim Badges from others, so they can send their teams to the next level of the competition.

Inspired by roguelikes and Darkest Dungeons.

Explore dungeons and other routes and recover treasure (Badges, Fossils and Dolls) and captured tuxemon.

Two tuxemon fight at a time, with techniques having different targets (some can reach either rank, some hit both ranks, some can only target one of the ranks) and some only being usable from the front or the back rank.

You can bring any number of tuxemon with you, but each additional one takes up slots that could be used for treasure and items. Recruit from foes you meet on the way - but note that each Capture Device uses one of your precious inventory slots!

Spend your treasure improving the town that you operate out of, building new facilities (gyms, daycares, museums, laboratories) and training your NPCs.

Tuxemon use field moves that they can use out of battle - clearing obstacles, detecting traps, healing allies - as well as regular techniques.

What if the villainous organisation in the game is one that the protagonist can join and work their way up the ranks of?

I had a couple of pairings in mind:

In either case, they would sometimes clash and sometimes collaborate, and they'd both be typically opposed to the Cathedral - although they may form temporary alliances with the Cathedral to serve their own ends.

With regards to Team Portal, the idea is that strange tuxemon would show up that resembled humans (see gijinka). 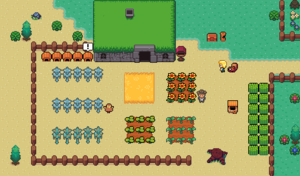 We already have a bunch of fruit and vegetable and other farm items, and animations for growing plants (many from Catch Challenger)

Options include "Defend", which would successfully block the opponent's attack but perhaps leave the monster vulnerable next turn, or "Use Dex", which would reveal some information about the enemy monster at the expense of a turn.

Grind mode would tell you immediately what happened and moves to the next decision that the player needs to make.

It could even play the animations while idle on the "What will ROCKITTEN do?" stage, and display the HP lost that round in yellow, but then they would be cut short when a selection is made.

If you chose the former, EYENEMY would be knocked out, ROCKITTEN's THUNDER PP would reduce by 1, and XP would be awarded.

If you chose the latter, it would play like normal.

Techniques that are useful in the overworld, and that don't take up a slot for battle.