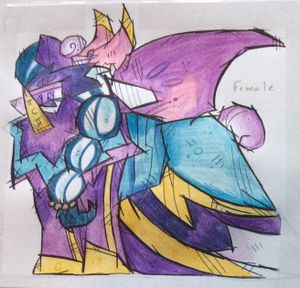 In the mating season, Male Jiquid becomes very hormonal and aggressive, and will fight other males to prove their strength to the females

Female Jiquids are very aggressive when caring for their young, they can only have 1-3 fawns per year, and since the species is endangered she must do everything she can to protect her descendants.

Alternative blurb: Male Jiquid will often prowl through gravesyards and around churches, protecting the dead and searching for victims to satisfy its thirst for blood. They are worshipped by the people, as they symbolise strength, resiliance and grace.

Stags, does and the jiangshi. Alternative colourations are based on Dracula and blood.