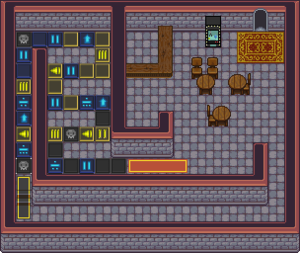 Start from the first tile after the red carpet, which is blank. It would cost $200 (or whatever) per go. These would count as credits, so $200 would display in the top right of the screen.

If you lose a few times in a row, the game could open a new possibility to win. For example, the third time you lose you would see a hole in the wall you could slip through to skip a part. Or the owner of the game gives you the price if you defeat him/her in battle or if you do him/her a favor. (tamashihoshi)