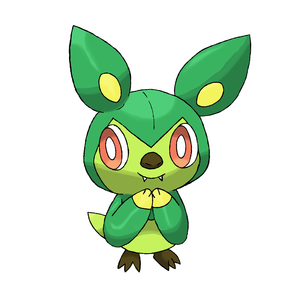 Fruitera is a friendly, yet mischievous monster that has been known to become friends with people at first sight. It is found in fields and prairies. It has a powerful pound, and has been known to attack other monsters for items it wants, especially shiny ones. The Fruitera has been known to hoard items it finds, and often ends up with a very valuable nest. It is especially known for stripping entire fruit trees, leaving nothing behind, even if it could not store all the food.

Design by jozzer26. Front and back sprites by Rawng. Face sprites adapted from the front sprite by Sanglorian.